Jonah Hills directing and writing debut film ‘Mid 90s’ was definitely worth the watch and well worth the money. It’s a movie I most certainly will actually buy.

I don’t have any real connection to the 90s other then what pop culture has to offer. Mainly rap and movies of course. I grew up on rappers like 2pac, 50 Cent, and Eminem. I know that 50 and Em are more of early 2000 rappers but you get the point. It’s not an era I can refer to as mine own.

I also don’t have any real connection to the world of skateboarding. But I have had the smallest taste you could get of the skateboarding culture. Before I moved away from California, my closest friend at the time was into skateboarding. So naturally, I would tag along with him and would go the skate park.

And what’s portrayed in ‘Mid 90s’ is what I remembered. Groups of kids who were there for hours and lived to skateboard. But just like Stevie, I couldn’t skate. I would just push on the board and ride in a straight line. I remember trying to go down a small ramp into a bowl and just absolutely eating shit. I remember hearing a laugh. But that’s it, one laugh.

I didn’t get heckled or made fun of (that I noticed). What I remembered was being 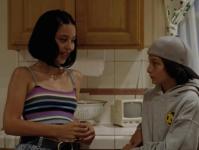 encouraged to try a different ramp or basic move. I can’t skate for shit now. But that still doesn’t taint my experience from the movie.

Hats off to Trent Reznor and Jonah for the score of this film. The soundtrack was absolutely on point for this movie. I was bobbing my head with every song that played. There weren’t any SUPER popular songs in the movie. Don’t get me wrong there was one Nirvana song. But even then it wasn’t ‘Smells Like Teen Spirit’….the obvious chose.

Every song was purposely picked and didn’t feel out of place. In fact, having “lesser known” artists made it that much more immersive.

There were so many genuine scenes in the movie. A lot of stand out moments like the party where Stevie and Estee hooked up, or the fight scene between Stevie and his older brother Ian. The showcasing of Stevie’s innocence with Estee was a huge reminder to me that he is a kid. You (at least I did) almost forget about that the more you watched Stevie grow as a person with his new group of friends.

When Stevie comes home from the party trashed and belittles Ian, it was shot and cut perfectly. You go from a scene that displays purity and innocence to a, as I would describe, a moment of adulting. Stevie was finally standing up for himself. But, it wasn’t handled properly. The cut between Ian screaming, and Stevie trying to (I’m assuming) kill himself was powerful.

I at no point thought that Fourth Grade, Ray, Ruben, and Fuckshit we’re trying to “corrupt” Stevie. I think if anybody else who didn’t understand skate culture, like Jonah, directed, that would’ve easily been miss portrayed.

This movie was also an amazing look into what exactly the culture was like in the 90s. The word “fag” just freely being used without the bat of an eye. Or when Stevie was told to not say “thank you” because it was gay.

When Ray asked Stevie what he thought about the “Sunburn” question and Stevie answered with, “What’s black people?” I was shocked. Because it was the perfect response. Instead of giving him a throwaway funny line, he got to say something extremely meaningful. I read into that deeply. After watching Jonah’s interview on ‘The Breakfast Club’ and seeing his appreciation for black culture, I knew instantly he loved that line. I bet that has been there since the first draft. It was a great line that had deep social commentary that didn’t feel corny or forced.

The last moment I will talk about was the end. Before Fourth Grade put on the movie, Ray said something very simple but great. He said, “You know you don’t have to do that right?” Clearly he was telling Stevie he didn’t have to do crazy shit to be friends with them. But I took that as a message he was trying to tell the group. Fuckshit didn’t have to get fucked up to be crazy or cool.

I got a big chuckle when Fourth Grades movie was called “Mid 90s” that was a cool moment and smart conclusion. Jonah Hill, Trent Reznor, and A24 make a perfect group that I hope sticks together. Definitely watch this movie.